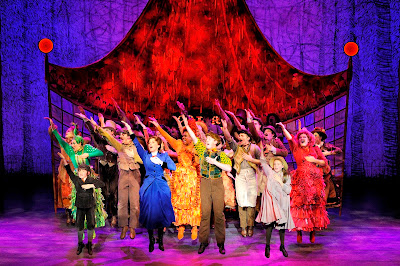 One of my proudest achievements was my role as a tap-dancing penguin in our school’s year three production of Mary Poppins. As one of many who grew up presenting concerts to amused grandparents about supernatural nannies and charming chimney sweeps, I was intrigued as to how Poppins’ famously impossible feats would be achieved on stage.

The Disney and Cameron Mackintosh production of Mary Poppins at Sydney’s Capitol Theatre is a visual and aural spectacular that will have audiences of all ages convinced of the power of magic. Superb backdrops change within a blink of an eye, a talented cast doesn’t cease to impress, and the special effects are first class. Combined, they present a seamless and enchanting tale of the mysterious nanny who transforms the dull lives of the Banks family.

Verity Hunt-Ballard, Matt Lee and Marina Prior form part of a stellar cast that delights throughout. An opportunity to immerse yourself in an imaginary world full of happiness, enchantment and magic – no matter how old you are.

Read my full review of Mary Poppins on liveeverylastminute.com.au.

lifeafterfive*
We're "young professionals" in black and grey but we still care about music, edgy fashion and fabulous food. We still want to find meaning in the small things, cry and laugh reading non-business related books, and dance to daggy music like no one's watching. So when we do manage to beat the clock, what are we doing? danzafterfive@gmail.com